Amid significant market volatility, the fourth-quarter earnings season continued last week and provided a broader look at the earnings across the sectors. This week will be the busiest of the earnings season, with 109 S&P 500 companies scheduled to report earnings. 33% of S&P 500 companies have reported results so far, with 77% and 75% exceeding consensus earnings and sales estimates, respectively. That is similar to the results in the third quarter. 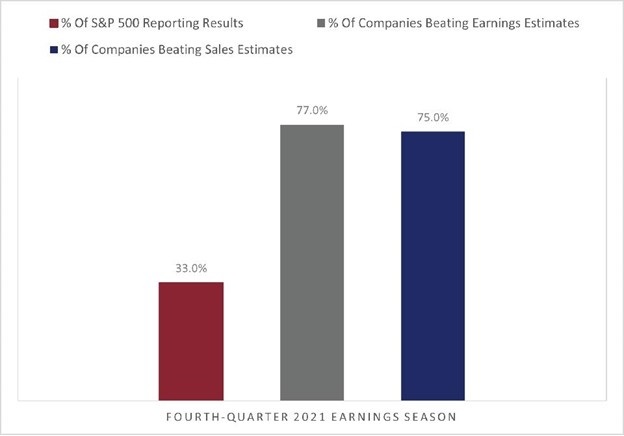 As expected, forward guidance has remained essential with the current worries about the economic outlook and future earnings.  The impact of supply chain disruptions and any color about the timing of normalization are significant for forecasts. Earnings from Netflix (NFLX) cast a pall over technology and the growth segment of the market after its disappointing subscriber numbers the previous week. The negative sentiment continued to start last week, but solid earnings and outlooks from Microsoft (MSFT) and Apple (AAPL) helped break the gloom by the end of the week. Earnings helped lift the overall stock market and drove the outperformance of growth stocks versus value. Value stocks have outperformed by a wide margin since the recent market declines began. But the question is will they continue to outperform. Last year we had similar results at the beginning of the year. 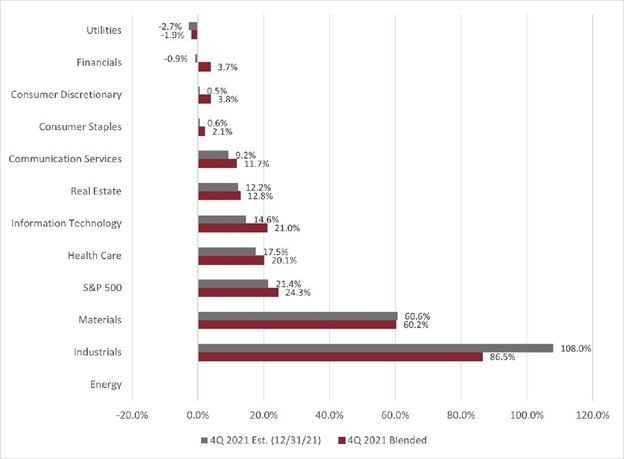 Most sectors are also posting actual revenues above estimates at the end of the quarter. In addition, looking at sales allows us to see the massive rebound in the energy sector. The energy sector is the only S&P 500 sector with price gains year-to-date. 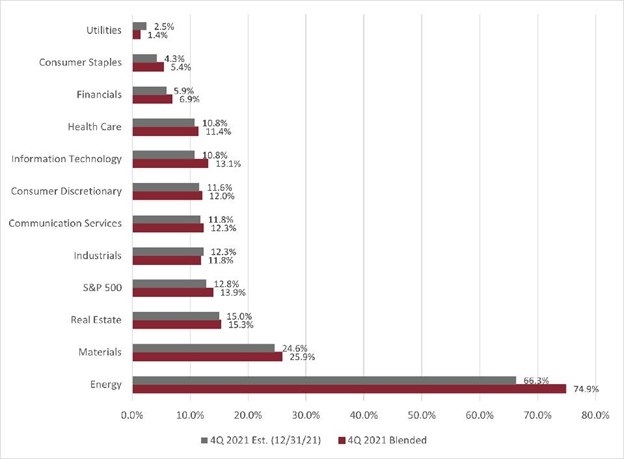 As of market close last Thursday, the S&P 500 reached a ten percent correction from the high reached in early January. According to Goldman Sachs, ten percent corrections have typically proven to be good buying opportunities in the past. Since 1950, the median return over the next year was 15% versus a typical median return of 10%. In addition, the S&P 500 was higher over the subsequent year 76% of the time.

The Federal Reserve's policy statement from last week plus Jerome Powell's post-meeting press conference made it abundantly clear it is ready to start raising short-term interest rates in March.

As of early this morning, the futures market for federal funds was pricing in five rate hikes (of 25 basis points each) in 2022.   The Fed is badly behind the inflation-fighting curve.  The Consumer Prices Index rose 7.0% in 2021, the largest increase for any calendar year since 1981.  Meanwhile, commodity prices continue to rise.

However, we're still skeptical the Fed will move as aggressively as the financial markets are pricing in.  If the Fed were really serious about the inflation fight, why didn't it announce a sudden and early end to Quantitative Easing last week?  Instead, the Fed maintained QE, which increases the size of its balance sheet, even as it released a set of "principles" for reducing the size of the balance sheet.

Think about how absurd the current situation is.  Maintaining QE while signaling it will soon start Quantitative Tightening is like deciding to keep digging a hole deeper, even though you already know that in an hour you're going to take all the dirt you dug up and use it to fill the same hole back in.  Why not just stop digging now!

Either way, we think QT starts around mid-year and the Fed will be more aggressive about it than it was back in 2017-19, when the fastest pace of QT was about $50 billion per month. The best reason to implement a larger QT is that the Fed needs to counteract the excessive growth in the M2 measure of the money supply that is the root cause of higher inflation.  Unfortunately, the Fed is still not focused on reducing M2 as a policy goal.  Fear even affects the Fed in that they are afraid their policy will be responsible for a major move down in the markets. So they are content to leave well enough alone and as a result inflation continues.

Instead, I think the Fed will pursue a robust pace of QT for other reasons.  First, the Fed would use QT as a signal of its commitment to keep lifting rates, knowing that market conditions may, from time to time, make it temporarily tougher for the Fed to hike.  Second, the Fed thinks selling off longer-maturity securities could modestly lift long-term interest rates, creating more room for it to raise short-term rates without inverting the yield curve.  A yield curve inversion means short term rates are higher than long term rates.

And third, if the Fed doesn't substantially reduce the balance sheet, it could be a position in a few years where it's paying large financial institutions around $100 billion per year.  That's what would happen if the banks are still holding $4 trillion in Fed reserves while short-term rates have hit 2.5%.  No Fed chief wants to explain to Congress why it's paying the biggest US banks $100 billion per year.

The bottom line is that the Fed has its work cut out for it.  This won't be a one-year job, or even two.  Wrestling inflation back under control may take several years.

One way to move inflation backwards would be for the government to open US pipelines. Energy independence is a ticket to lower inflation and a calm international policy.