How similar are 1981 and today when it comes to inflation per the cpi?

In the past week, it was reported that the inflation per the cpi was as high as in 1981. I think this begs the question, how similar are the two time periods? So I am going back to 1981 to help you understand the perspective. Frankly, the only thing similar is the inflation numbers. Everything else about the comparison is dissimilar. Read on if you need some assurance and peace of mind.

Hopefully, this will help you understand the analogy I am making in comparing 1981 and 2022.

The S&P 500 index was introduced to the stock market in 1957 as an index that was more representative of the U.S. economy than the popular Dow Industrial index. The S&P 500 index provided back-tested data to 1925 based on the historical prices of the stocks that made up the index. This allowed investors to see how the new S&P 500 index compared to the Dow Industrial index. The back-tested data prior to 1957 is still used nowadays for historical market cycle analysis such as the secular market cycles that I so often comment on.

The stock market is best viewed with a long-term perspective as this puts the stock market's current performance into the right context. The following chart shows the 1981 bear market on a 90-year chart of the S&P 500 (actual index performance since 1957 and back-tested performance prior to 1957). 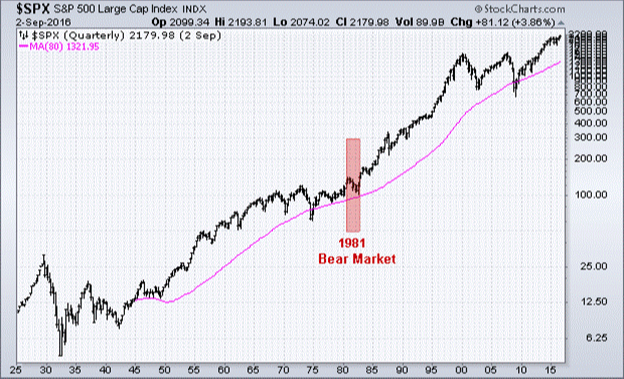 (We are currently in a secular bull market)

Bull markets and bear markets along with the less severe market corrections are a normal function of the stock market. To reassure you, the long-term direction of the stock market is upward in line with the general expansion of the economy over the long term. As a result of the 2017 tax act and the numerous deregulations in 2017 and ’18, in this, the foundation for the economy was established, which was also the foundation for a secular bull market.

The 1981 Bear Market in Detail

The 1981 bear market can be viewed in more detail with a 20-year monthly bar chart as shown below. 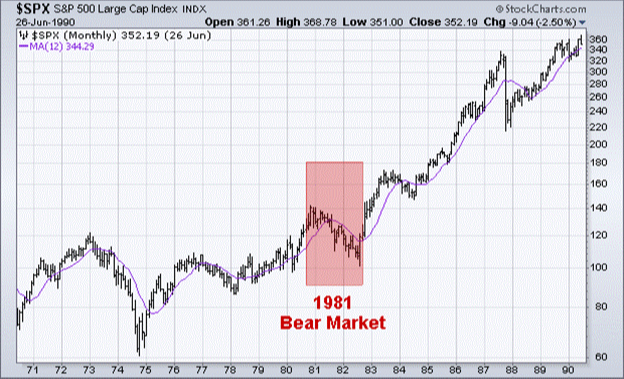 The above chart shows how the 1981 bear market temporally interrupted the market's advance from the 1974 lows.

The 1981 bear market is shown again with a 3-year weekly bar chart which provides more detail on how the stock market moved through its bear market cycle. 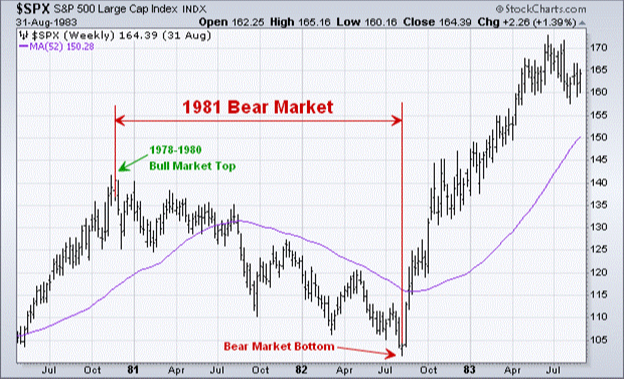 The above weekly chart shows that the stock market does not go down in a straight smooth line but that the downward journey through a bear market is actually quite a bumpy ride. This is normal bear market behavior with declines and several short-term rallies lasting a month or two.

The 1981 bear market (which started in November 1980) lasted for just over one and a half years and the S&P 500 index dropped around 30% before bottoming out. What is significant about this downturn was that it preceded the most significant secular bull market in history. The 1982 to 2000 secular bull market averaged over 14% annual return.

Also note that the 1981 bear market was during a secular bear market and that it came after Paul Volcker, Fed chief, increased interest rates by 10% in one year. The prime rate was 21% and Treasuries were yielding 14%. Sometimes we forget how horrible that time period was. And yet the market downturn was 30% not 50%.

In addition, the severity of Fed policy pushed the unemployment rate up and dramatically lowered demand for goods and services, which created a recession in 1980 and 1981. After two years of pain, the markets took off for 18 years.

My point in presenting all of this is to point to the similarities between 1981 and today and the dramatic dissimilarities. The underpinnings of the economy are still strong today (secular bull market) even though the inflation is high.

Leadership is also important. In 1981, Reagan was president and he led the country in so many positive ways including the economy. Our current administration policies are not pro-business or pro-economy. That is a drag on the economy and markets. Hopefully, this negative economic policy will end soon. Until then, we will see slower growth and a battle for the middle class to survive. Until then expect market returns to be positive but slower and not the 18% returns we experienced in the past 4 to 5 years.

The bottom line is don't sell, as we are near a bottom and selling merely locks in those losses. Stay the course and you will be rewarded. I still expect a positive 10% return in the next 12 months and possibly by the end of the year. Stop reading the internet as there is an abundance of negative information and speculation. I will continue to inform and present to you the facts. Great investing is sometimes like a fish swimming upstream. Keep the faith as I want you to make great returns and that comes with discipline.