Home builders most certainly have short-term challenges. People have been locked in their houses, unemployment has skyrocketed like never before and nobody knows exactly when life will get back to normal. In this environment, a lot of folks are not going to want to buy a new home anytime soon.

But it looks like some if not most of those challenges have been priced into the sector. Home building stocks have fallen much more than the S&P 500 and Nasdaq 100 in 2020. 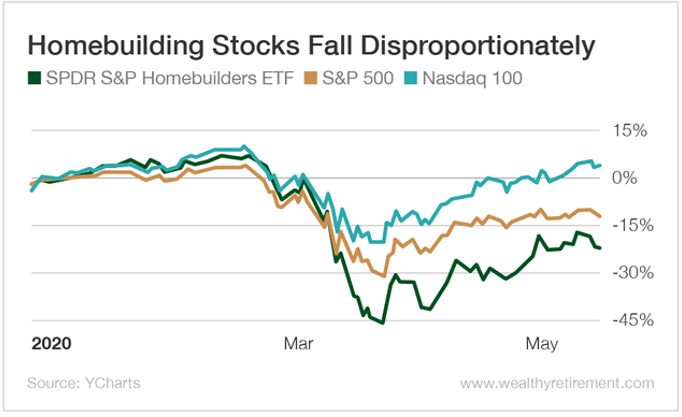 But this pandemic isn't going to last forever. I can't tell you specifically when economic activity will fully rebound, but eventually it will. It always does.

The American economy has been through world wars, housing crashes and terrorist attacks, and it always comes out the other side even stronger. Remember, even the Spanish flu of 1918, which took 50 million lives, was followed by the Roaring '20s where the stock market grew at 20% each year.

When we do get past our current challenges, I believe investors will realize that American homebuilders have very strong long-term prospects. A big part of my bullish long-term thesis for homebuilders can actually be attributed to our last crisis: the popping of the housing bubble. Since the collapse in 2008 (50% drop in home prices), America has not been building nearly enough new homes. 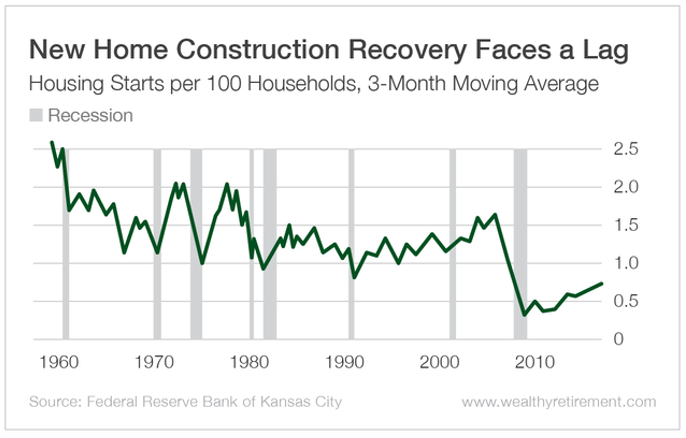 New home construction since the housing crisis is at its lowest level in 60 years.

From 1960 to 2008, the number of new homes built in the U.S. ranged from 1 to 2 per 100 households. Since 2008, that number has been just 0.5 new homes per 100 households - roughly half the bottom end of the normal range. Homebuilders were overly aggressive in the lead-up to the implosion of the housing bubble. Burned by that experience, the industry modified its behavior too far in the other direction.

In fact, it over adjusted so much that we are now looking at the creation of a new kind of housing crisis... not enough new homes!

According to Realtor.com, nearly 10 million new households have been formed in the United States since 2012. Meanwhile, only 5.9 million single-family homes have been built during that time. Pent-up demand is growing, and there is not nearly enough housing supply to satisfy it. Once we get past the COVID-19 crisis, it is going to require years of elevated levels of new homebuilding to catch up.

But even better for these businesses, this shortage isn't the only major macro force at play...Low interest rates are also very good for homebuilders. Low rates mean low borrowing costs for homebuyers. 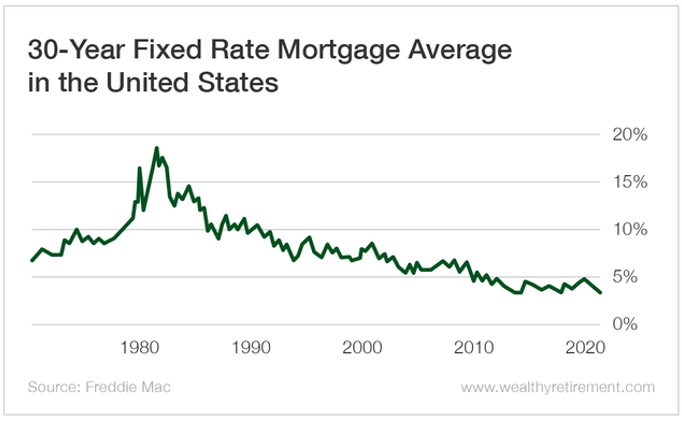 This obviously further increases levels of interest in buying a new home (and increases the prices buyers are willing to pay). With the Federal Reserve's double-barreled bazooka response to the COVID-19 crisis - which so far has involved slashing interest rates to zero and sending out trillions of dollars in stimulus - you can bet interest rates are not going higher anytime soon.

Realistically, 2020 and maybe even the first half of 2021 are not going to be banner times for homebuilders. But the longer-term earning power of the premier companies in this industry will not be lessened by 18 months of lower earnings. Once we get past this pandemic and the country gets fully back to work, the long-term setup for homebuilders is very attractive.

Here is a simple equation that I think these companies will be working with for the next decade...

So what does this mean for home buyers and home sellers? For the home seller, demand is going to be high again, like it was this past 10 years…even in Denver. For home buyers, the supply will not meet the demand and as a result, you will pay a higher price for the home. The good news for home buyers is that interest rates are historically low and that will make this purchase a good buy if you take out a loan, even if you don’t need one. Use the extra money to be in the stock market.

Real Estate again is a marvelous investment and the cycle is no where near over thanks to covid 19. Some will say that it is not time to sell because there will be higher values down the road. That may be true, but I would say that this is an opportunity for those in Colorado to sell during a market upturn. This could be a rare opportunity to sell and get an inflated price. Remember, in the past two years the market got soft in Colorado and the prices went down instead of up. Take advantage this year when the prices are sure to increase.