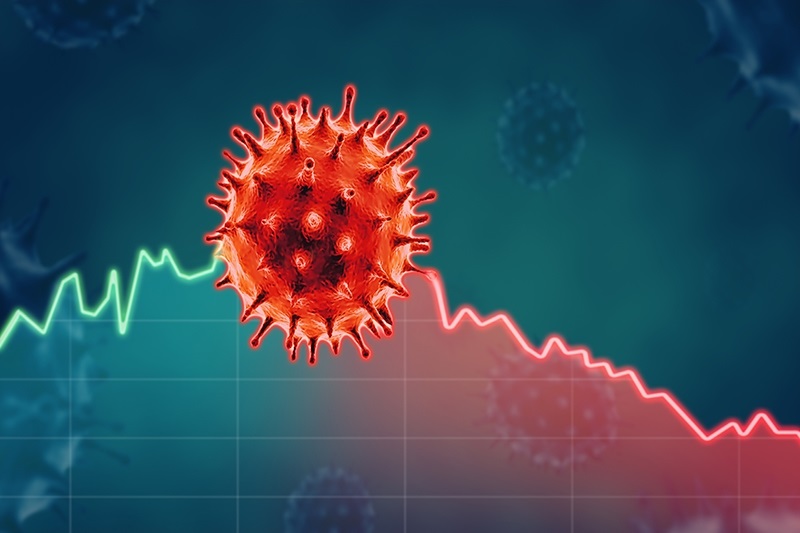 How much will the Coronavirus impact the US economy?

By the time you read this, you will have noticed the market down 7% just today. No one knows with any real certainty how much, or for how long, the Coronavirus will impact the US economy. What we do know is that it will have an impact. And, after data releases of recent weeks, we also know that the US economy was in very good shape before it hit.
Nonfarm payrolls grew by a very strong 273,000 in January and another 273,000 in February. The unemployment rate was 3.5% in February and initial claims for jobless benefits were 216,000 in the last week of February. Retail sales in January were up 4.4% versus a year ago. In February, sales of cars and light trucks were up 1.9% from a year ago and were above the fourth-quarter average. This suggests that total retail sales for February rose as well. Industrial production fell 0.3% in January but likely rebounded sharply in February. After all, hours worked in manufacturing durable goods rose 0.9% in February and colder weather likely lifted utility output.

Housing starts have been particularly strong lately, coming in at an average annual pace of 1.597 million in December and January, the fastest pace for any two-month period since 2006. Yes, part of the surge in homebuilding was due to good weather, so February will likely fall off to around a 1.49 million pace, which excluding December and January, would be the fastest pace of building for any month since 2007.

Putting all of this data into their model, the Atlanta Fed projects real GDP is growing at a 3.1% annual rate in the first quarter. That’s not a typo. However, March data, which isn’t available yet will likely bring this number down. The early economic headwinds from the Coronavirus are coming from slower production in China, which likely led to a big drop in inventories. We expect this to pull first-quarter real GDP down to a 2.0% growth rate and we are now thinking growth will be zero in the second quarter.

After that, given previous episodes of rapidly spreading viruses, inventory replenishment should boost growth to the 3.5 – 4.0% annual rate range in the second half of the year. This may seem optimistic, but keep in mind what happened when the “Hong Kong flu” hit the US from September 1968 through March 1969, killing around 34,000 people in the US according to the Centers for Disease Control. During the last quarter of 1968 and the first quarter of 1969, real GDP grew at an average annual rate of 4.0%.

The “Swine Flu” in 2009 also did not lead to a recession. However, a much more negative story unfolded in late 1957 and early 1958 when the US was hit by the “Asian flu,” which killed almost 70,000 in the US and didn’t spare younger people as much as the Coronavirus. Real GDP was growing around 3% annually in 1957, but as the flu started to peak in Q4, the economy shrank at a 4.1% annual rate, followed by an annualized 10.0% plunge in the first quarter of 1958, the deepest drop for any quarter in the post-World War II era (from 1947 through 2019). But then, right after the plunge, the economy rebounded at a 7.8% annual rate for the next five quarters.

Before the Coronavirus hit we thought the odds of a recession in the next twelve months were about 10%. Now we think they’re around 20%. Higher, but not high. There is no precedent for the first social media panic regarding the flu. Either way, here’s a simple rule of thumb: if the unemployment rate goes up 0.4 percentage points or more compared to where it was three months prior then the US is probably in a recession, otherwise it’s probably not. The jobless rate was 3.5% in December, so unless it goes above 3.9% soon the economy is still growing. The bottom line is that we’ve had severe cases of flu before without a recession and when we did have a downturn, the economy bounced back very quickly. The stock market is pricing in a steep drop in profits, which is certainly possible. A strong recovery, which we expect, will reverse this as it has in the past.

Don’t be pulled into the political rhetoric and how one politician would have handled this crisis better than another. Thank God, the doctors handle this kind of crisis and they have this one pretty much in their sites. Tough to watch stocks tumble, but the upturn will be a hard move up when it turns. I still predict a 10% to 15% upturn by the end of the year. Stay invested, the economy is still strong and virus or oil price changes are not going to overnight derail this economy. Take a vacation for a month and all of this will seem like old news.