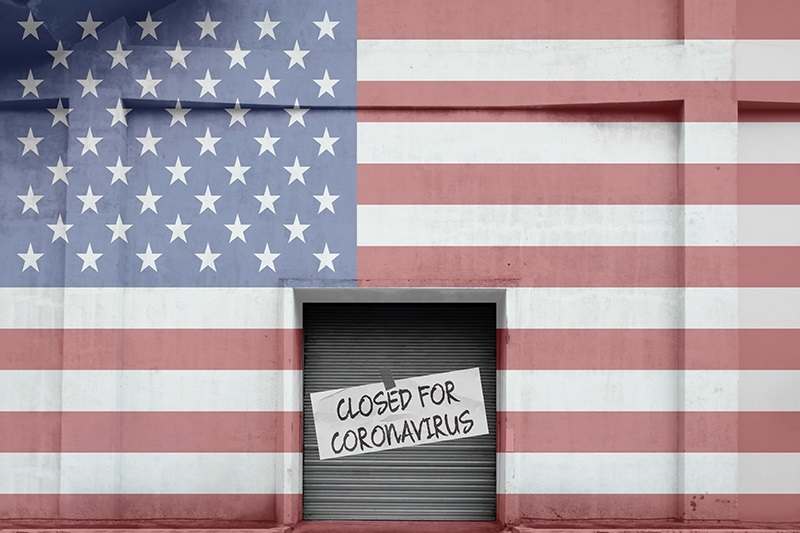 Welcome to the coronavirus shutdown

Welcome to the coronavirus shutdown. We all know when you shut down airports, restaurants, bars that the economy is going to have a contraction. January and February were very strong economic months with over 270,000 new jobs each month. That is a huge reason the contraction will be short, and the upturn will be fast and strong.

We are seeing March data come in and it is weaker so we could have a GDP for the first quarter that is flat to down and we expect the second quarter of 2020 to be a minus 20% annualized that is a negative 5% for the quarter. That comes on the heels of 2-3% growth over the past 3 years. I expect unemployment to rise above 6% short term.

To put this virus in perspective, the last time that the flu caused something like this contraction was in 1957 and 1958. The difference, which I will explain later, is that this will be a short-term contraction. We expect that growth in the third and fourth quarters and into 2021 to make up for lost ground in the economy and job creation with the markets again hitting new highs.

One of the interesting points is that this is exactly what happened after the 1957/58 contraction, which was a really bad virus that killed a lot of people. I believe the number was around 70,000. I do not think this virus will kill anywhere near that number. It is helpful to look at how China and South Korea and Japan have reduced the number of cases and are now on the downside of the virus. We are doing much the same things that South Korea did to slow down the numbers.

What we are seeing in the past decade is that every time that we face a problem the government always thinks it will be worse then it is. We keep hearing that the worst case is going to happen. They claim there is going to be a 20% to 40% infection rate. Let’s look at South Korea. They ramped up testing quickly and a couple of days ago they had 250,000 tests and had found 8,000 cases. In other words, only 3% of the tested people had the virus. That is a far cry from 20%!

Here in the United States testing is ramping up. In the next week, we are going to see hundreds of thousands of tests. Currently, they have had over 45,000 tests for only those who were highly suspicious of having the disease, those in the high-risk category and the doctors and nurses who were front line services. Only 9% were infected. Even with that high-risk group we only had 9% infected. I think when we have far more tests that the number will resemble South Korea. I say that because the assumptions that experts are making are flawed by small samples of high-risk categories and those numbers are still nowhere near the 20% to 40%.

The government can’t play games. Hurricane Katrina is a perfect example. During it, President Bush was attacked relentlessly because of the response of the various agencies. Ever since then and possibly further back, the government’s responses tended to go at a crisis perhaps stronger than we need to. Don’t take the current response as a clear sign that this is worse than many think it is.

When we look over the past, (SARS and MERS and the Swine Flu), which was an awful flu, and 1957 and 1958, we find that in each incidence the cases went up and then within a short period the cases went down faster than they went up. (FARS law) My view is this one be no different than in the past. In this case, the government is doing far more to decrease the possibility of further cases through closures and social distancing. The government is acting like this is the worst case we have ever seen because if they fail, they lose! Politics is an ugly partner in cases of crisis.

The second thing that has happened is the Federal Reserve has lowered the short-term interest rates to basically 0%. They are also pumping millions of dollars into the economy and issuing lines of credit. All good for major corporations. Small business help is also being discussed and solutions are being implemented.

Third, some are comparing this movement in the market to 2008, but this is clearly not 2008. We are not going to see a cascade of losses taking down the banking system. The banking system is in healthier shape than ever before. As a result, these responses by the Federal Government are going to keep the damage to the economy lower than it would have been otherwise. The downturn in stocks will be short and the recovery will be quick as opposed to 2008 which took 5 years to recover.

If we look at China, South Korea and Japan, the lifespan of the crisis is about 6 weeks as they are now showing far fewer cases. Even Italy which has seen a huge case load, had an increase of 20% per day last week and the increase this week is 9% per day. As a result, we should see a turn in the data in the next three to four weeks here in the US. I am not just an optimist. I look at the data and then act on the facts. The facts point to a short-term event that will put a short-term contraction in the economy and a short-term downturn in stocks. The result will be a fast move up with a full recovery within 18 months, not 5 years like the 2008 downturn.

Will this be a recession? The simple answer is yes. A recession is two negative quarters of GDP and I suspect that the first two quarters of this year to be negative. This is not a typical recession. When we come out of it in the third quarter the Fed is easier (low-interest rates) and government spending will have kept people and small businesses afloat. So, instead of a protracted period of time for a recovery, we will see a V shaped recovery.

The final point is the stock market is pricing in a 50% to 80% decline in corporate profits. The 2008 downturn which lasted 18 months, there was a 50% decline in house prices, over a 70% drop in house building, a 70% drop in car sales…we had massive declines in economic activity and a collapse in the banking system. Corporate profits only declined by 40%. My view is this market has already discounted a worse environment than 2008!

And here is a key point, the market will turn before it is over. So once data starts to improve, in fact, once we get more real data, the markets will reverse direction. Markets go down on a lack of data and uncertainty. So once data comes in and we find out the worst-case scenario is not going to happen, the market will start turning up. Wall Street anticipates positive economic numbers 3 to 6 months ahead of the actual numbers but hates uncertainty.

Viruses in the past have always disappeared over time and generally over short times. There is no reason to believe this won’t go away as well. Reacting negatively to this panic and selling would be a huge mistake as an investor. Every time one of these things has happened before markets have come back and gone on to new highs, and it can happen very quickly. If you wait too long to buy-in, you will have missed it.

Every downturn creates enormous opportunities. The last time we had this type of opportunity was 2008 but in that particular case, there was some time to react. This time is different. You will not have much time to react. You need to anticipate the move up and react now. What should you do?

Don’t wait for the bottom as the market has already priced in a 60% drop in corporate profits which is way overdone. It could go down more but that is overcompensation and not worth waiting for. Besides, no one will ever know the exact bottom precisely. The move-up will be fast so waiting for the bottom will inevitably be a loser’s game.

And finally, please forward this message to anyone you know that might be worried or confused or simply does not understand what is happening in the markets. If they would like to be on our commentary list, they can click on the link at the bottom and enter their email address. If you think they would value from the past three commentaries I wrote they can find them here!

Again, if you are still worried or fearful and would like to talk, know that I am always available for a phone call or a meeting. We are here to make sure that your assets are protected and that you achieve above-average returns. With facts comes clarity. With clarity comes good decisions.

Blessings to all of you and please stay safe.